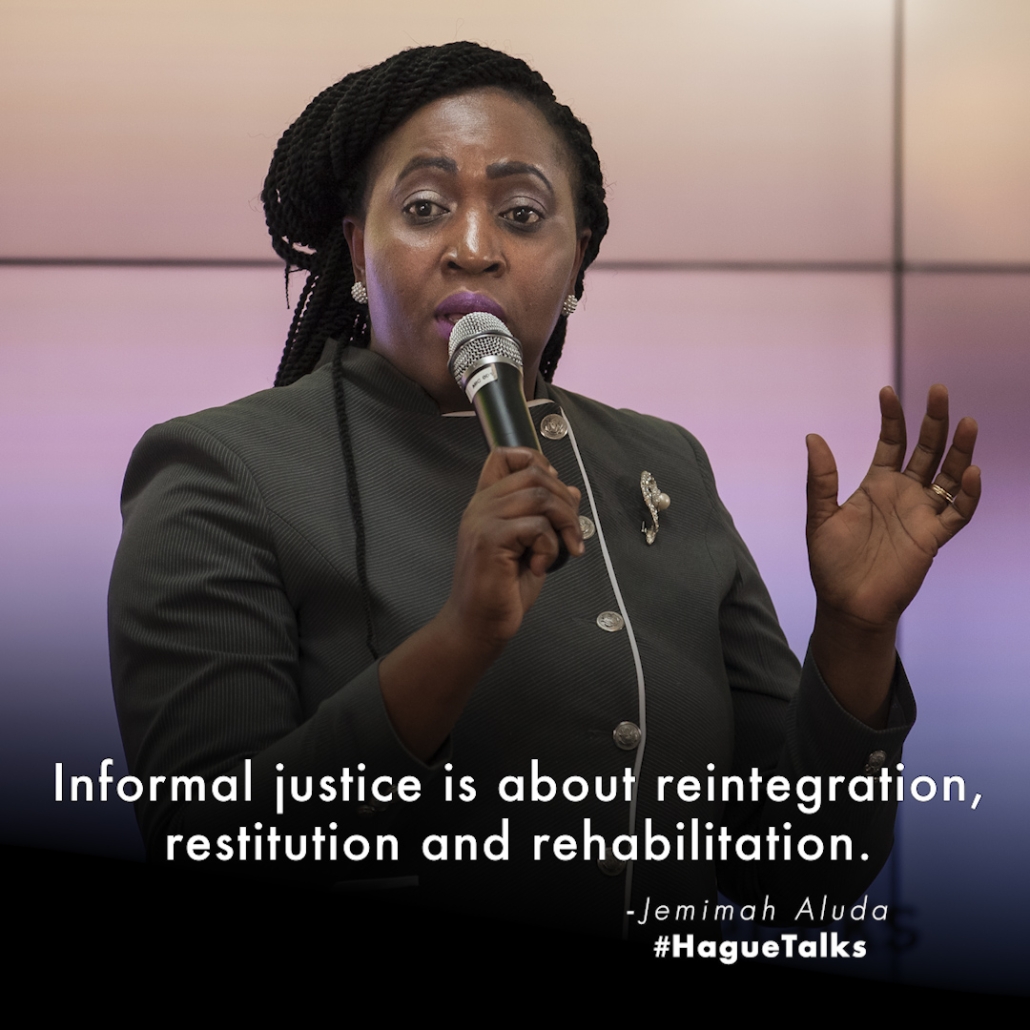 Jemmimah Teresiah Aluda is a Kenyan born Advocate of the High Court of Kenya and Human Rights activist, notable for her work, promoting equitable access to justice for all.

She has been a Public Prosecutor in the Office of the Director of Public Prosecution, prosecuting, electoral offenses, gender-based violence, financial crimes and children in conflict with the law, among other areas, and is a strong advocate for the use of Alternative Justice Systems (AJS) in the Kenyan criminal justice system to enhance access to justice.

Jemimah is part of a select team of Kenyan justice and peace advocates and experts in their respective fields, who collaborate with the International Criminal Court of Justice, based in he Hague, to promote equitable access to justice at the international level.

She participated in HagueTalks in 2019, organized to coincide with The Hague Justice Week every year, with the aim of sensitizing varied audiences about justice and peace.  This year’s theme is ‘Just Speak.’

HagueTalks look at justice and peace from different angles and perspectives to spark innovative thinking and action.

She spoke to Wanja Gathu, a Freelance Journalist in Nairobi, Kenya for The Hague Justice Week.

Q. How did your collaboration with The Hague start?

As a Public Prosecutor working with the Kenya criminal justice system, and the 2007 post election violence that brought in the International Criminal Court (ICC) to Kenya, I took part in a series of talks around crimes against humanity organized by the Hague. That’s how our interaction began.

I was later invited as one of the speakers for HagueTalks in respect of my position as a board member of the Federation for Women Lawyers (FIDA Kenya). I was chosen because I had participated in the 20th Commission On the Status of Women (CSW) in 2019 in New York where I gave a talk on access to justice, through the International Development Law Organization (IDLO), that facilitates access to justice for all”.

Q. How has your collaboration with HagueTalks impacted your career?

HagueTalks gave me an opportunity to engage with women on an international level and look at different justice systems in different countries and how they handle societal problems.

It helped me discover innovative ways of enhancing access to justice.

HagueTalks gave me international exposure and allowed me to share my perspective widely.  My participation at HagueTalks improved my standing as a lawyer and as a result, I have received requests to speak from the USA and The Hague itself.

Q. You visited the Hague Peace and Justice City in 2019. What was your experience?

I was there to contribute to a journal on access to justice organized by International Development Law Organization (IDLO) and enjoyed great interactions.

The Hague City is beautiful. There is this awesome mini lake that I found very therapeutic.  Unlike in many countries that I have visited, I found this city walk able. It offers a unique variety of shopping and dining for every budget and palate.  I would love to visit again soon.

Q Do you think HagueTalks have had the desired impact?

HagueTalks have had a great impact on their target audiences by opening up discussion around access to justice. I feel however that the talks benefit only a few people with vested interests, but there is a disconnect when it comes to cascading those benefits down to the common man.

Moreover, there is a need to link the talks to institutions of higher learning like the University of Nairobi in Kenya, Tanzania, South Africa, and with public forums to encourage dialogue and generate public interest.

Q. Would you say that HagueTalks benefit the Kenyan public some of whom may feel aggrieved in one way or another?

There is a need to cascade these talks down to the common person so they too can benefit.  The organizers of HagueTalks can do this by involving and inviting the local media to report on these talks, in a language that the local people understand.

Q. What lessons have you learnt in the course of your work and perhaps want to share, now that Kenya is going into an election?

I have learnt a number of lessons: Election related violence occurs because of a number of factors, mainly: political tensions, false expectations harbored by the electorate, economic hardship and ethnic tensions, driven by the erroneous perception that if a person from my community is elected, my life will change for the better. These factors give room for electoral violence and crime.

Kenya can address this by stepping up voter/civic education to help manage expectations and increase accountability so that those elected are held accountable.

Voter education helps the electorate know their rights. Voters have the right of recall but because of ethnic attachment and erroneous perception that if a person from my community is recalled then we as a community are under attack, this right is not exercised.

Kenya can change that by making national leaders aware of their responsibilities toward the electorate. The electorate must in turn demand accountability from their leaders.

Q:  Do you think dragging some Kenyan political leaders before the ICC and charging them with crimes against humanity following the 2007 post election violence, will deter would be purveyors of violence in this 2022 election cycle?

Yes to a degree. Having dealt with electoral offences in 2013 and 2017, I would say there has been some deterrence. If you look at what happened in 2007 and equate it to 2017, there was a marked decline in election related violence.

The 2017 ruling in Kisumu that held police accountable for the murder of Baby Samantha Pendo also served to deter police.  The command responsibility principle as applied by the court, in this case, made police commanders aware that they would be held accountable for the actions of those under their command incase of violence when on duty. They therefore needed to do what was right.

Q. Has there been positive change at the top since top political leaders were charged at the International Criminal Court?

Yes. Because top government officials, those in the civil service, lawyers and even some media workers were charged at the ICC after the violence in 2007, everyone is now very cautious and very careful not to perpetuate violence.

Q. What are you doing to ensure that upcoming elections will be peaceful?

We have had targeted training on election security awareness. There has also been increased collaboration between the government, civil society and other bodies to ensure that we have a peaceful election.

Through the Judiciary Training Academy we have been able to train judicial officers on customary justice systems and in collaboration with funding from the National Government, we will this July, train administration officers (NGAO) on alternative dispute resolution mechanisms. County government officials have been trained on how best to enhance access to justice for all.

Q. President Kenyatta, his Deputy, William Ruto and others were charged before the ICC following violence in 2007. These cases have yet to be concluded more than ten years later. In your view, is justice delayed denied?

This is part of the reason why I advocate for alternative justice systems. Court cases drag because of technicalities.  In Informal justice systems there are no technicalities. The language used is the language of the people. Costs are lower and enforcement is swift because enforcement is done at the community level. There is no police involvement.

In some cases, justice is delayed because some people think that if a case is rushed, ‘I am likely to be found guilty and sentenced’.

Why Advocate for Alternative Justice Systems in Kenya?

We want to change the justice system in Kenya to a community justice system where people sit as a community, talk about their concerns and find solutions. These include, land disputes, tension because of scarcity of opportunities, tension over grazing lands- We want people to talk about it at the community level and resolve these issues there and then. If the issue is about leadership, some communities will even come up with power sharing agreements and by so doing, enhance cohesion and minimize violence.

How has AJS been received by the Kenyan public?

People are ready and rearing to go the AJS way. Recently, I trained 130 faith-based organizations on AJS.

How do you make sure that the resolutions reached in an informal setting stand?

Because the people themselves have chosen to use this dispute resolution mechanism, they are often ready to abide by the rules and because the elders command respect, the people have an obligation to do as their elders decide. That is not the case with court decisions.

How is AJS working So Far?

It is doing very well in ISiolo, North Eastern Kenya, in Kericho and Kajiado where elders deal with land disputes, we have been able to hear and conclude many cases.